The Food of the Phuket Vegetarian Festival

Thetsakan kin che or “The Vegetarian Festival” is celebrated all over Thailand, but not as intensely as it is in Phuket. For nine days the majority of the island is vegetarian. Everybody is dressed in white and the temples are heaving with prayers and the occasional sound of firecrackers. Before I post about the more intense practices and celebrations, I want to share with you the amazing street food on offer during the festival.

Having lived in Phuket for a few months and being vegetarian it was amazing having so much choice when it came to food. I wasn’t too limited in my options normally, but I would eat at restaurants more often than I’d have liked.

The language barrier isn’t so tough in most restaurants and they usually have a menu for me to decipher, but it sometimes felt that I was missing out on some street foods. Generally the street food vendors English was poor and the term “vegetarian” doesn’t translate well in Thai as they tend to confuse it with veganism, sometimes the confusion of my eating of egg but not meat would be more effort than it was worth and I would get a “Sorry no hab” despite me actually having options.

The vegetarian festival meant that almost all of the street food near to temples were serving vegetarian versions of their usual delicacies. A bonus to those that can’t speak Thai, all of the vegie food stalls had yellow flags with Chinese characters so they easily stood out, I could confidently eat anything for miles.

The festival lasts for nine days, and it really feels as though the whole island takes part in it. On scooters and walking in the streets, people at work and going about their business are wearing white for the event. Even 7Eleven had bought fake meat versions of their frozen food and had full refrigerators of fake sausages, salami, Laab, curries, you name it. You can feel the excitement in the air as soon as the first day lands.

There is  a Chinese feel to the food at the festival, with Chinese buns, Chow Mein and roasted chestnuts being staples of the event, but despite this, there are plenty of other cultures creeping in with crepes and sushi being as out of place as they are delicious.

Pictured immediately below (and in the header), it  may look gross, but it was a Chinese meaty spring roll that genuinely blew me away, don’t be turned off by the aesthetic, the flavour is full and the texture is as you would expect with a normal spring roll, just… meatier.

Scroll down for some more pictures of food from the festival. 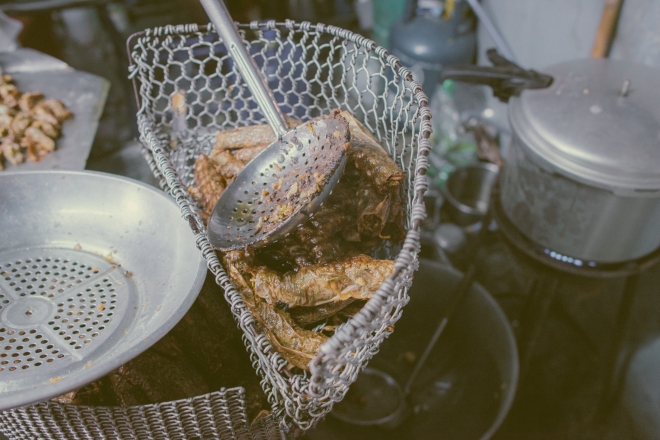 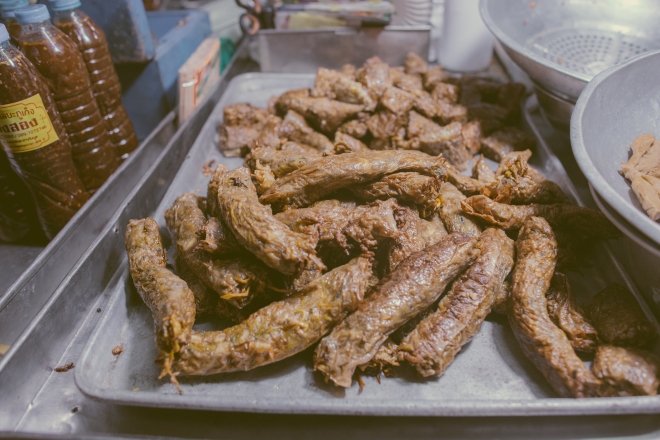 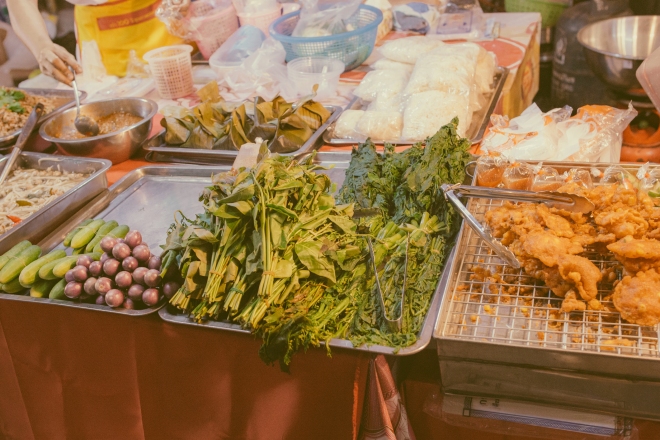 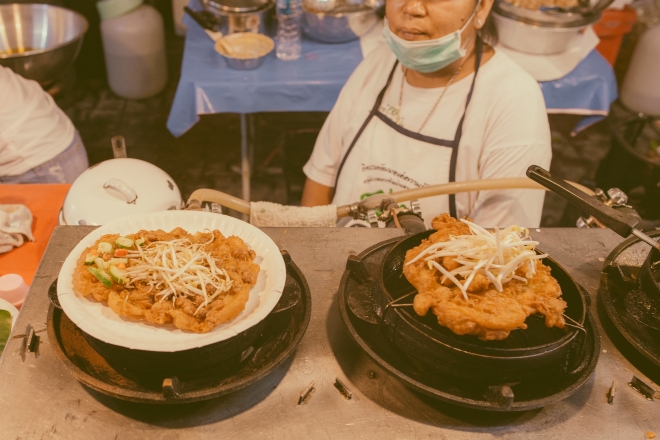 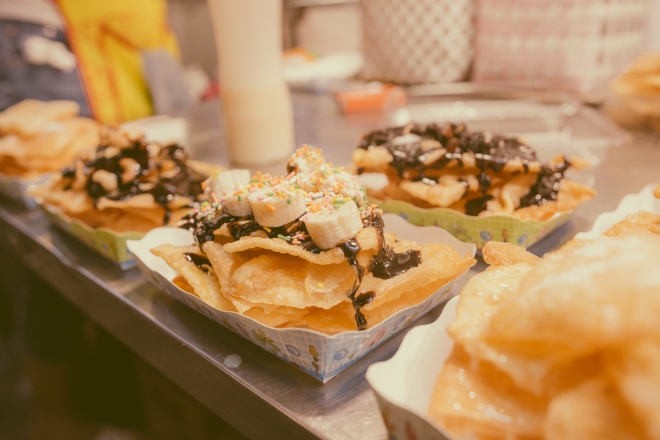 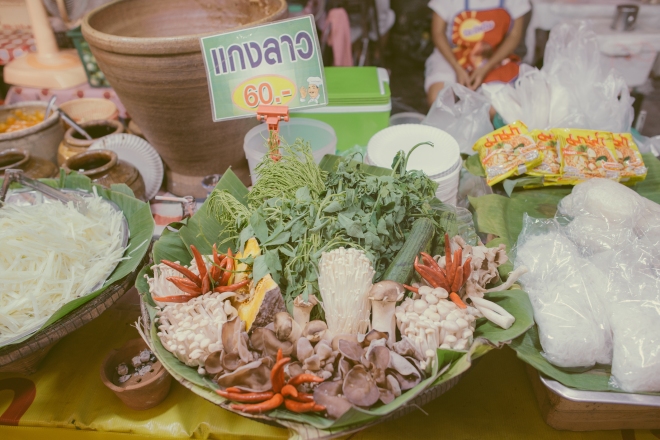 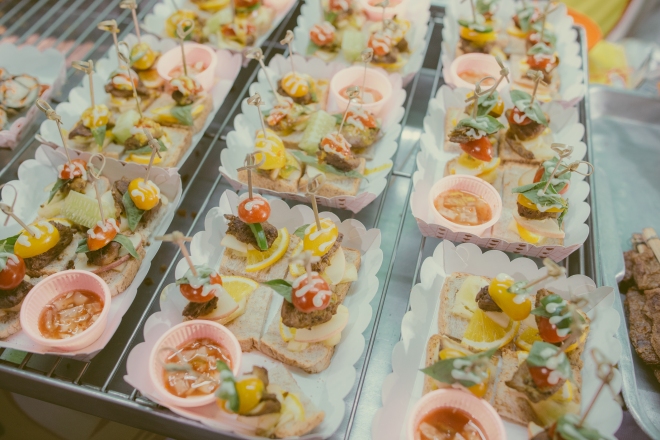 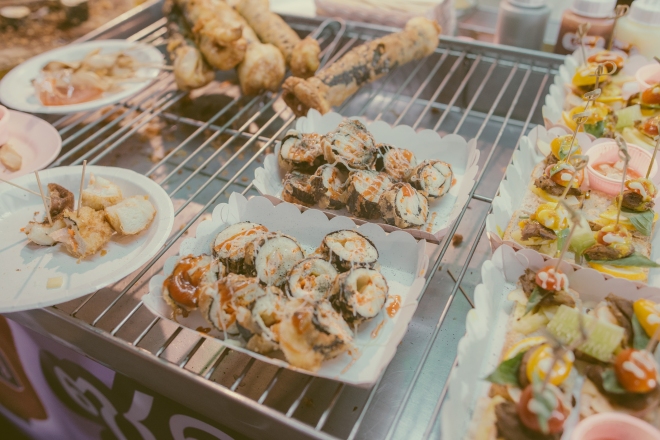 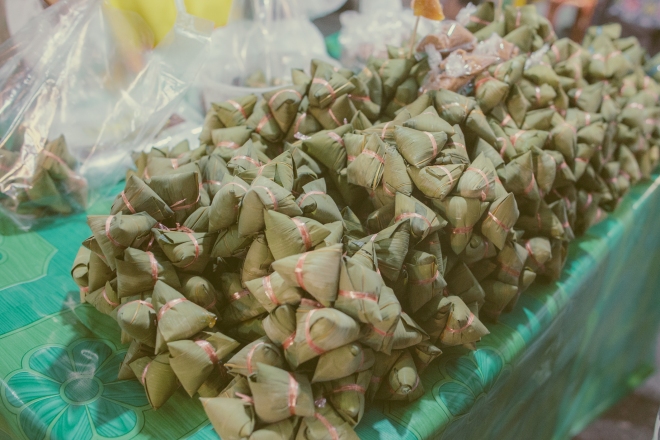 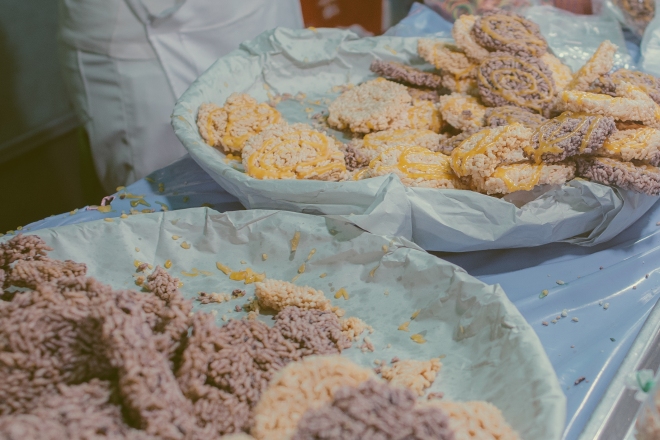 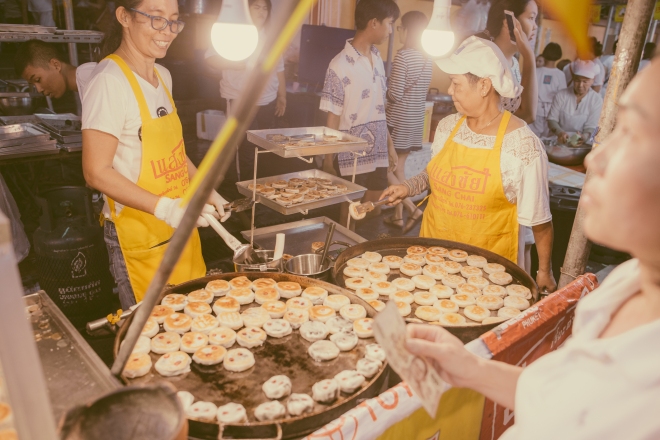 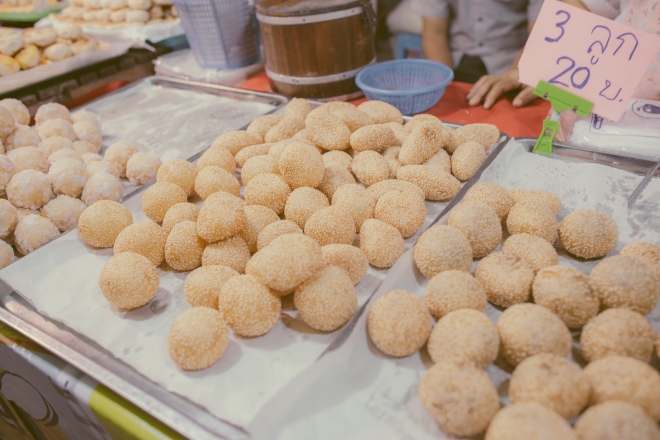 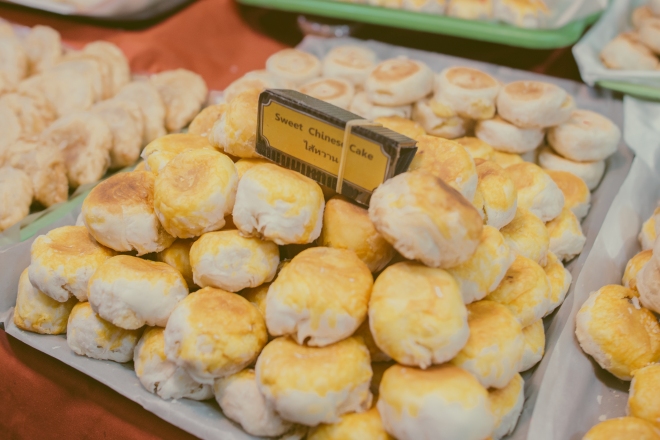 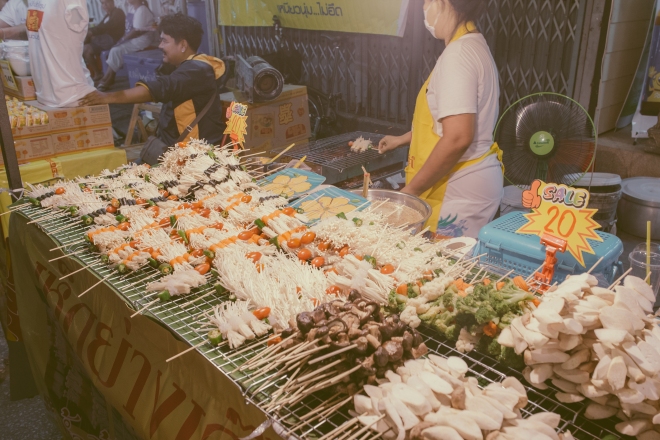 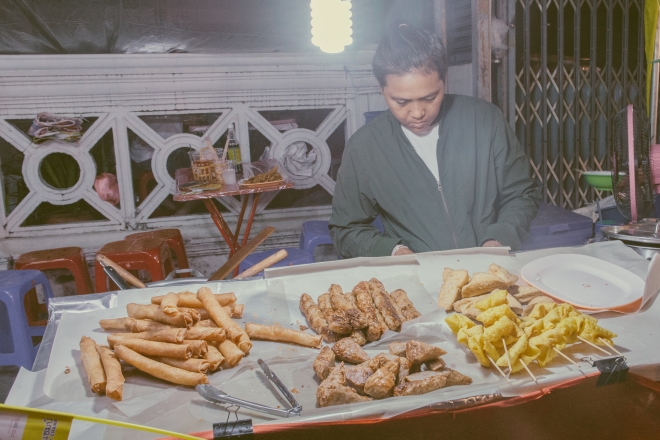 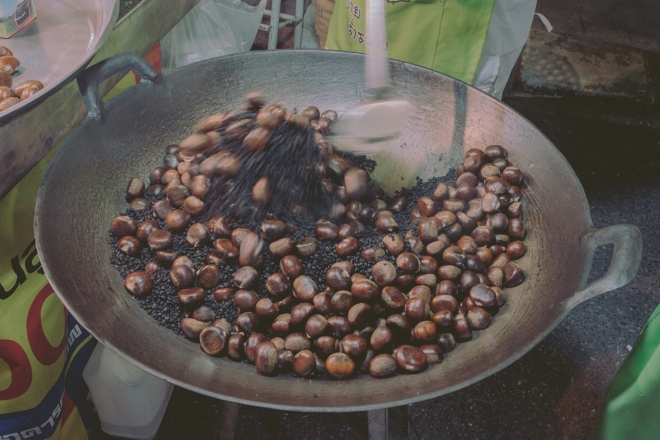 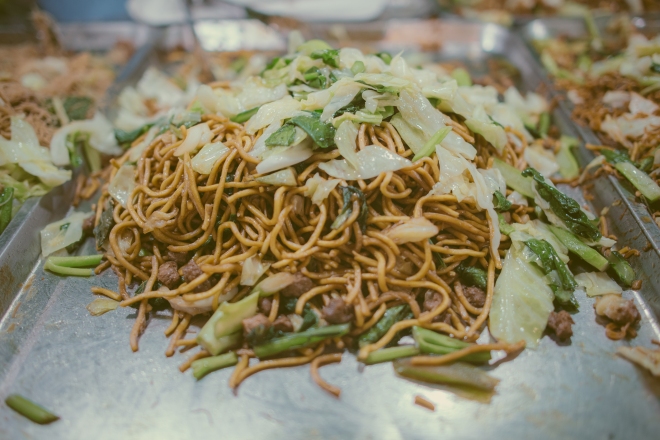 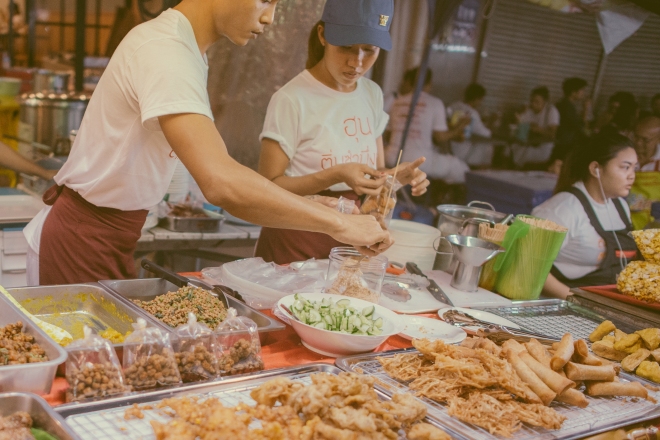 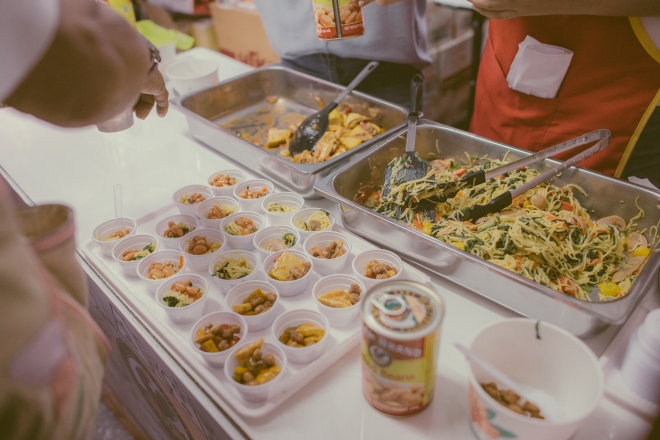 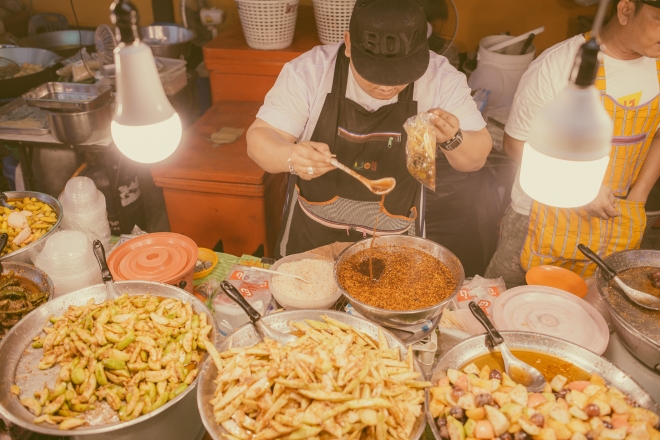